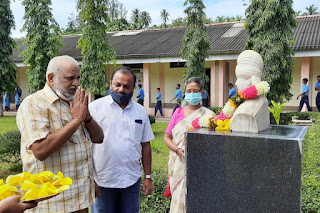 They were welcomed and honoured with school band reception. Firstly, they have offered flower and garland to the statue of Swami Vivekananda. Around 183 students, 17 teacher, 03 teacher from VKZPV Ferrargunj and 5 non teaching staff were attended. 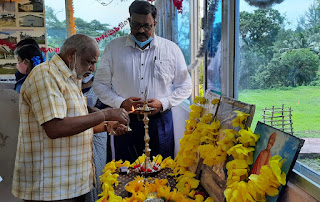 The Programme was compered by Smti. Princy K.R. Programme started with lighting the traditional lamp and floral tribute by Chief Guest and followed by Manglacharan.
The Welcome address and the introduction of guests were delivered by our Principal Shri. S. Rajkumar, during which all the dignitaries were welcomed with bouquet. 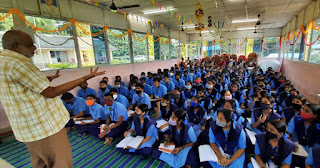 Then, Adarniya Vishwashji interacted with the students of Class IX to XII, in which he motivated the children through narrating interesting short stories and inspired them to explore intellectually, to set a goal and to achieve the same, not to forget our culture and heritage, live a purposeful life and be a patriatic and dedicated to our nation.

Our Guests lectures were arranged in two venues, so on the other side, Susri. Priyamvada Didi interacted with the children of VI - VIII where she motivated them with the incidents from the life of  Swami Vivekananda to develop our personality as wanted by Swami Vivekananda..

Later at around 10.20 am, there was an interaction of Adarniya Vishwashji with our teachers and it started with the teachers' self introduction. Then Adarniya Vishwashji through his exceptional inspiring speech, motivated the teachers to blossom like a flower and spread the fragrance with love to others and also suggested to follow three rules in our life as said by Dr. A. P. J. Adbul Kalam, they are read the scriptures, do meditation and selfless service to the society. The Program ended with Shanti Mantra at 11.20 am. 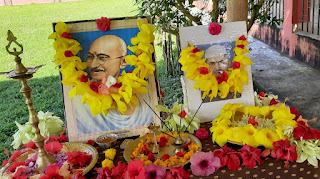 on 2 October 2021, we have celebrated the Birth Anniversary of Mahatma Gandhi and Lal Bahadur Shastri in a befitting manner. it began with Procession moved form school gate to IRBn main gate at around 8:15am. Altogether 16 teaching staff, 4 non teaching staff and 201 students of classes VI - XII have participated in the entire event.

The Programme started with lighting the traditional lamp and floral tribute by our Principal Shri. S. RajKumar. The entire Programme was anchored by Smti. Sabita Devi.
The importance of the day was highlighted by Smti. Nisha Yadav in particular on the life of Mahatma Gandhi and Miss. Bhumika Tripathi highlighted about the life of Lal Bahadur Shastri and Kumari. Susmita Bhattacharjee of  class XII also gave a speech on this special day about both the Personalities. 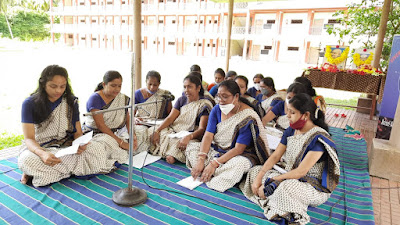 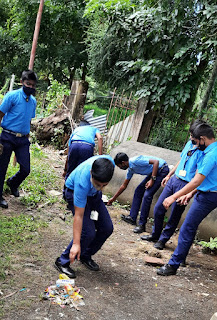 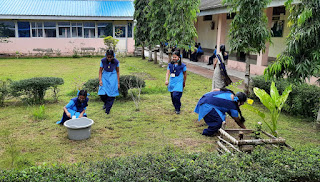 The Programme ended with Kendra Prathna at around 11.00 am.